Welcome to the Italian Alps….

First, however, I want to let you know that my recent Forbes pieces are here. They include an article about Txakoli wine from the Basque country, about a young woman about to circumnavigate the world via sailboat without stopping, and why this custom luxury lodge in the Italian Alps respects its origins, as well as ‘building biology.’

Now, back to the mountains.

In the year 218 B.C., a long-bearded Carthaginian general named Hannibal Barca, from what is now Tunisia in North Africa, crossed the French and Italian Alps with an army of some 20,000 motley, yet fierce warriors, as well as 37 elephants. The animals were brought to shock the Romans during Hannibal’s attack. Though few survived the crossing, the army was victorious in a few significant battles against Roman legionnaires.

Another onslaught of foreigners to these quiet mountain villages came in 2006, when Torino (Turin) hosted the winter Olympics here—across a conglomeration of ski slopes known as Via Lattea, or the Milky Way.

From this same region comes a wine you have likely never heard of.

Thanks to two women who live in the eastern U.S. (film maker Camille Broderick Rodier of Juharo Productions and interior designer Lucie McCullough) I recently spent time with an intriguing character, and wines he serves, in the Italian Alps.

He grew up in the same house that his family and ancestors have lived in for over 300 years.

Today, Daniele Ronchail is an accomplished architect who designs and leads renovation teams to improve existing structures. Sometimes he gets the chance for a special project.

(Check out the Forbes piece I wrote about the lodge—Baita 1697— that he and interior designer Lucie McCullough collaborated on.)

Daniele strives to use traditional materials and techniques, and to preserve the structural integrity of ancient buildings.

Like many of the residents from this region of Piemonte, Daniele is seriously focused on work and craftsmanship details, but still loves conviviality, good food and wine.

I met Daniele at the restaurant he also owns named Rivet d’Or in the Pragelato comune of the Italian Alps—west of the city of Torino. 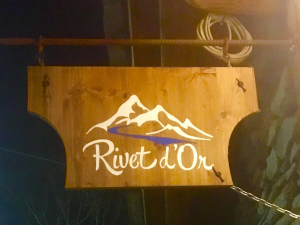 Daniele explained how his cellar holds hundreds of different types of wine, but in order not to confuse diners with an exhaustive list, he keeps it to a simple few pages, then changes the list now and then.

Instead of making his wine list a virtual monument to himself, or an advertisement about his cellar, he modestly provides a shorter list in order to keep clients satisfied and not overwhelmed.

Because Pragelato is part of the region of Piemonte, much of his wine list includes renowned vintages from further south, such as Barbera, Nebbiolo and Barolo.

(Italy has 20 regions; Piemonte—which means foot of the mountains—is the second largest region, after the isle of Sicily.)

Yet Daniele’s list also includes local wines from the appellation known as Pinerolese, which is located relatively close to Pragelato.

This Pinerolese appellation region is less than 100 acres (40 hectares) in size and produces less than 10,000 bottles a year. Ten different grapes can go into Pinerolese wine. If it’s called a ‘rosato,’ then half of the grapes must include one, some, or all four of the following varieties—Barbera, Nebbiolo, as well as lesser known Bonarda Piedmontese and Neretto (also called Chatus). If instead a Pinerolese wine is named after some specific grape, such as Barbera or Dolcetto, the wine must contain 85% of juice from that grape. Finally, to call such wine a Ramìe, it must include 60% of juice from Avanà, Avarengo, Bequet and/or Neretto grapes.

The point is this: these wines include some grapes you have likely never heard of before, but added in quantities that cannot be haphazard or recklessly experimental (that is, if producers want to obtain their government ‘denominazione’ quality control certificate, which often helps bottles to sell).

To drink this wine, it’s best paired with food.

So, let’s open Daniele’s menu. This includes a few quotes—perhaps from Daniele himself—such as:

“Do not look at the past with nostalgia … But take the best from it, and bring it into the future.”

During dinner we tasted two wines.

The first was on the list—a 2016 Merenda Con Corvi. The majority grape here is Barbera. With this we ate pork belly with oyster sauce, Jerusalem artichokes with a special ‘bagna caoda’ mousse (a specialty of the Piemonte that includes cream, garlic and sardines). The next dish was veal tongue on dried tomatoes. This selection itself formed an Olympic taste menu. The wine included that characteristic blueberry and biscuit taste of Barbera, but was also light and smoky. Barbera historically was considered sort of a common grape for making wine; no longer. In the past decades winemakers have been concocting some seriously flavorful, and more complex, juice from this grape.

I finished glass number two of the same wine before we even moved onto the next dish: rabbit ravioli with butter and hazelnuts.

Daniele told me of his life and architecture business, then uncorked a bottle of 2015 Pinerolese Ramìe, made by Coutandin. Only a few thousand bottles of this wine are produced each year (so few that it was not even on his wine list). The included grapes (as mentioned above) were listed as Avanà, Avarengo, Chatus, Becuet, Barbera and others. The taste of this wine has the wake-up acridity of a Barolo, but is still less tannic and easier to drink young.

With this wine, out came the next plate: purple beet tagliatelle, followed by sturgeon with black beans, and then veal ‘cooked by osmosis’ with rocket sauce and rice vinegar.

Piemonte wine and food are unlike anything served elsewhere on earth (and appreciated even more after a day of sunblasted powerhouse skiing).

Visiting Daniele’s restaurant highlights how many people living in this Alpine region respect detailed cooking of traditional (and sometimes modern) dishes. Dining here is exposing yourself to a detailed mindset—focused on minutiae in the kitchen, as well as on selecting low production bottles that not only match food, but also surprise diners. Eating and drinking here is tasting cultural history.

While in Daniele’s restaurant I felt temporarily part of a local community. That’s something to savor while it unwinds, because such moments are fleeting.

If you enjoy getting out in fresh air, there’s also plenty to do in these mountains. Food and wine just complement a ski or hiking trip.

During days after eating at Rivet d’Or I shared more dinners at local restaurants with a few exploratory skiing aficionados pictured below. Their smiles tell all.

Next week, ‘primeurs’ in Bordeaux kicks into full gear—where we will taste 2017 wines to rate the overall quality of that vintage, as well as to compare specific wines. Remember—frost last year knocked out about half the grapes in Bordeaux (and many throughout Europe). The quantity will be reduced, but it’s the quality we’ll inspect.

Additionally, this coming weekend is the Printemps de Vin de Blaye, when we sample local Blaye-Cotes de Bordeaux wines within the sprawling 17th century local Citadelle, a UNESCO World Heritage site, and enjoy music and barbecues on the ample lawns.

Once again, thanks for tuning in…!