This post is overdue. I’ve traveled for a few weeks, some of which is covered in recent Forbes posts. A highlight was attending the inauguration of the reincarnated next spiritual leader, or rinpoche, of Bhutan (we met four years ago, and I was invited back after his 3 years of solitary meditation), as well as attending part of the Sail In Festival in Bilbao, Spain. Those posts also include a book review about the attraction of Volcanic Wines.

Four years ago, during s previous visit, I penned a blog post about searching for Bhutanese wine, mistakenly thinking this little nation of towering peaks and deep forests lacked wine production facilities, and that only rice alcohol (or ‘ara’) constituted the closest cousin to grape wine.

That is not true.

In a rest house outside of the city of Paro, I found a copy of the government’s manual of statistics for 2017. Inside, the numbers showed that the leading cause of death in hospitals relates to alcoholism. I suspect the real problem is that most alcohol in this highland country is dangerous, poorly made equivalent of ‘moonshine,’ which can eventually poison drinkers.

One counteraction is that the Royal Bhutanese Army is now involved with the production of wine and whiskey. First, the profits help support the army; second, the controlled quality of this alcohol is better for the people of Bhutan. The program is known as AWP, which stands for Army Welfare Projects, and was founded in 1976. 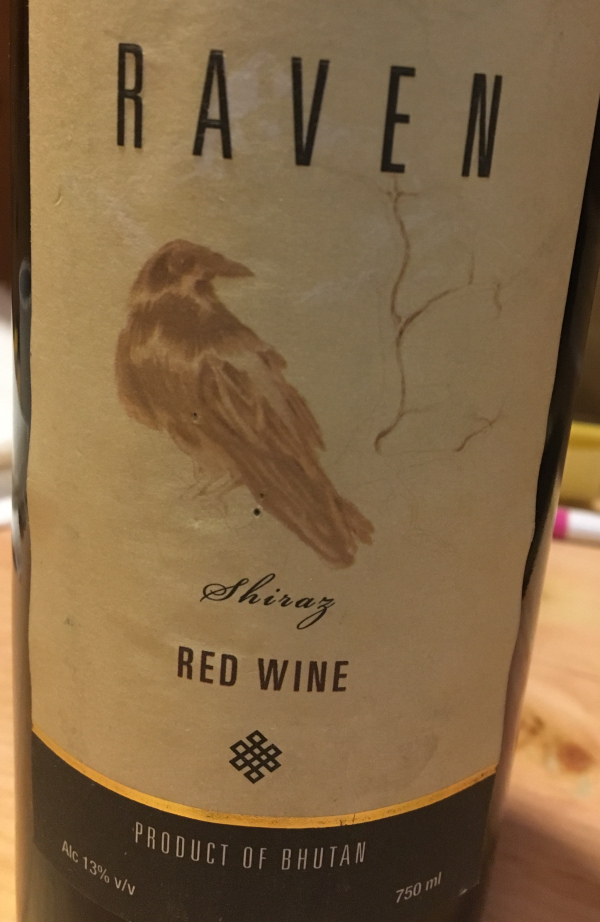 There are now a few commercially produced wines in the country (there may have been four years ago; I wasn’t aware then). One wine is made from peaches, and others from grapes. Most, but not all grapes are procured outside the country. 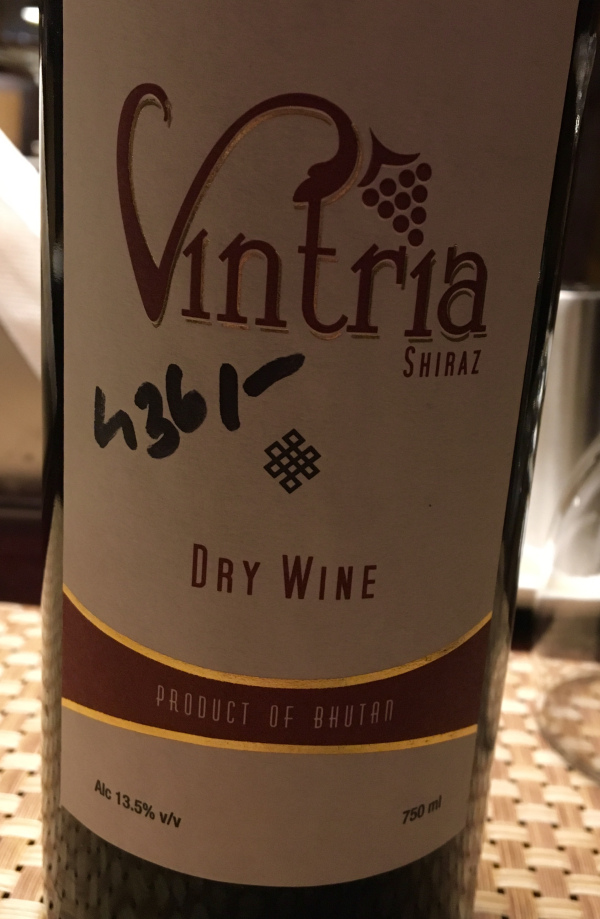 At a rest house in Thimphu I twisted the screwcap off a bottle of ‘Vintria Shiraz Dry Wine.’ The label declared that this ‘…elegant textured Shiraz Dry wine with great fruit flavors reminds of dark berry fruits, hints of oak pairing and vanilla aroma with long-lasting fruit palate aftertaste.’

Though the first sip was imbalanced and the alcohol tasted uninhibited, on the second sip I did indeed detect that vanilla, though the ‘long lasting fruit palate aftertaste’ was not happening. Some other ‘Bhutanese’ wines are actually produced in India and imported. The wine is yet of a caliber that during most of this trip I stuck with extremely good Bhutanese beers—Red Panda, Druk (both 5% alcohol) and Druk 11000 (8% alcohol). With time and more visitors to the country, the wine here will likely improve.

I’ve not yet sampled the whiskey, a bottle of which was given to me as a gift by friend and guide Tshering and his wife Wangchuk. The label looks enticing, with a drawing of snowcapped peaks and the words Essence of The Himalayas. It’s a blend of ‘vatted malts from Scotland’ and is produced at the Gelephu Distillery in Bhutan.

Irrespective of wine and whiskey, the photos below show a sampling of life within this peaceful little mountainous nation, which includes a closed border to the north with Tibet (which China now claims) and a southern, open, border with India.

The rinpoche we met is apparently the 8th reincarnation of Tenzin Rabgye, who in the 17th century did much to bring together the people of Bhutan. One way he did this was by adopting annual festivals in each town, a notion he acquired from an emissary he sent to visit Nepal. The festivals draw people out of their relatively secluded mountain homes and villages, and are often attended to by politicians or members of the Royal family, coming from distant regions. A few of the following photos and short video below are from the national day festival we attended within the massive and handsome fortress, or dzong, within the town of Punakha.

How does a ‘reincarnation’ come about? Basically, when the King visited the eastern part of Bhutan for National Day one year, a five year old boy from a very poor family in Trashigang tugged on his clothing as he was walking, and declared that he was Tenzin Rabgye (who had lived in the 17th century). Thinking he was being teased, the King asked him a few questions, and found the boy able to describe the route to, and interior of, Tango Monastery in the west of the country. The boy and his parents had never been there. The King sent two groups, including monks, to meet the boy with his parents. During this time they quizzed the parents, who had not coached the boy, but had sent him at a young age to be trained—as he emphatically desired—as a monk. During quizzing, the boy’s knowledge about Rabgye, the names of his parents and about monuments on the other side of the country convinced the visiting monks this was no ordinary child.

The major cities in Bhutan are Paro and Thimphu, about an hour drive from each other. There are still no traffic lights in either and the pace of life is a bit sleepy, but the number of vehicles is ramping up and the cafes catering to foreigners are multiplying. With road improvements, it’s now about two hours to drive to the town of Punakha, which sits tranquilly along a river valley. During this trip, vehicles cross Dochula Pass. There’s a sizable cafe and a monastery and stellar views—on clear days—of the highest Himalayan peaks in Bhutan, some of which are between 18,000 to over 25,000 feet  (5,400 to 7,500 meters) in elevation.

During both visits to Bhutan it was on Dochula Pass where I experienced unexpected shafts of mental clarity. Which was a little odd. If these were to happen anywhere, I expected it would be while meeting the Rinpoche or hiking to Tiger’s Nest monastery. Both were similar—basically being aware of being ready for far larger scenarios to unfold in life (which occurred after the last visit). Dochula Pass is quite the transition point.

That’s all for a brief report on this jewel of a peaceful, mountainous, Buddhist nation.

Recently a friend named Brad, who I spent time with in Angola, Pakistan and on a sailboat in Colombia and who now lives in a small town named Coyote, New Mexico, sent me this New Yorker article about Chinese wine. It’s entertaining, especially the latter portion where the writer is cruising around the countryside with some guys who pilfered wine and drank it from a huge plastic jug.

Thanks for tuning in again. We have a nice lineup for the coming months, including more on Swiss wine and sommeliers, a yet to be revealed Tuscan wine in London, more peeks at Hungarian wine, and perhaps a few vintages from Sicily.