Weeks ago in Bordeaux city I met a friend to share wines. It’s oddly refreshing that the best wine bars in this renowned city of wine are simple restaurants that lack ornaments or distraction.

Last summer I took a road trip with Julien Pouplet to the Loire Valley. (Julien was interviewed several times in the Russell Crowe narrated documentary about French red wine – titled Red Obsession. That was when he still looked Bohemian and before his wife told him to get a haircut.)

Julien appreciates good wine, and has the rare ability to sniff out wonderful values.

This time, re-united in Bordeaux city, we first visited Le Flacon (The Vial), where the scent of fresh home cooking is strong as you enter. 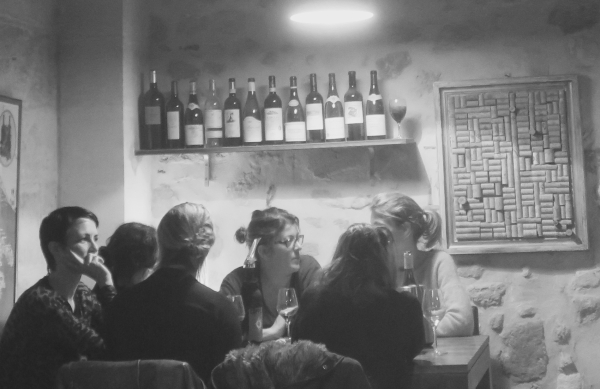 The proprietors are Gilles Davasse and his wife Valerie, from Toulouse. They opened this wine bar and restaurant three years ago. The atmosphere is casual and simple, though the wine list is elaborate. 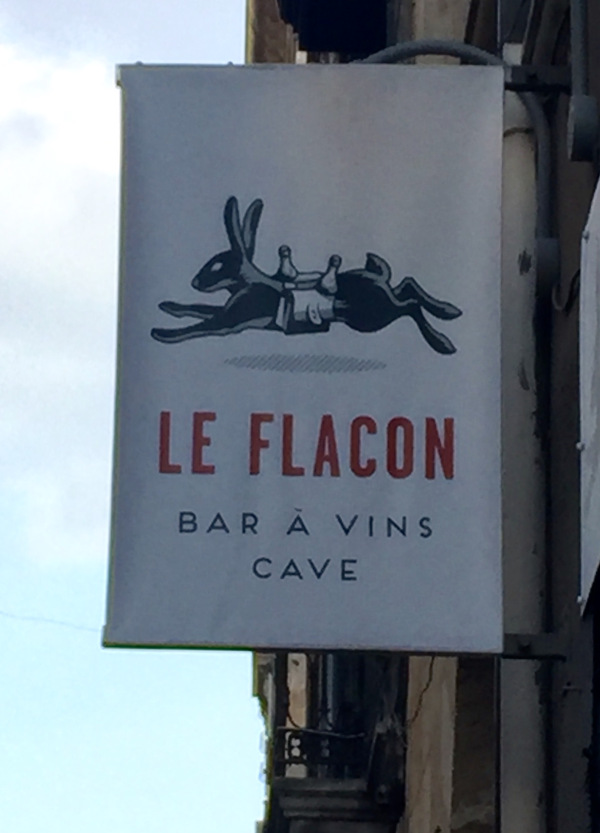 We started the evening with Loire Valley wines, then moved onto Burgundies, and finally to a Rhone Valley wine as we careened on foot to different wine bars.

We began with a Domaine de Belliviere – Les Rosiers (which was recently selected by Decanter Magazine as one of the Loire Valley’s top wines). It comes from the northern Loire, from the small appellation in Le Mans (think fast cars). This taste was a hit of fruit – apricots, tangerines, and lemon – which provided a beautiful kick-start to the evening.

We next visited the wine bar L’Univerre (The Universe) – which has a stellar reputation in the city. 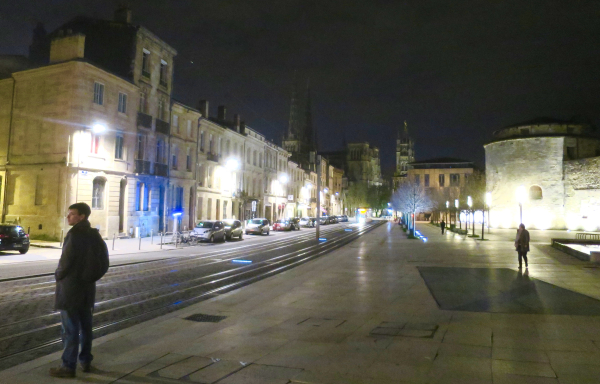 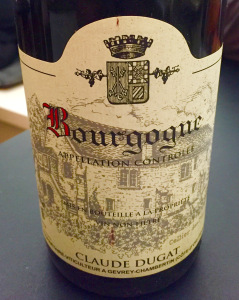 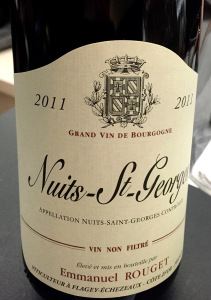 “This is the best wine list in France,” Julien said.

Because the en primeur tastings were starting in Bordeaux that week, visitors were pouring in from throughout the world. “We’re lucky to get a table tonight,” he mentioned.

We started with a white Burgundy (these are all made from Chardonnay) – a 2011 Roulot Bourgogne Blanc. Because the grapes are from the famed Meursault appellation and the flavors are so intense (fresh, chewy, apples and nuts) this was actually a bargain for the quality – at 35 Euros a bottle. 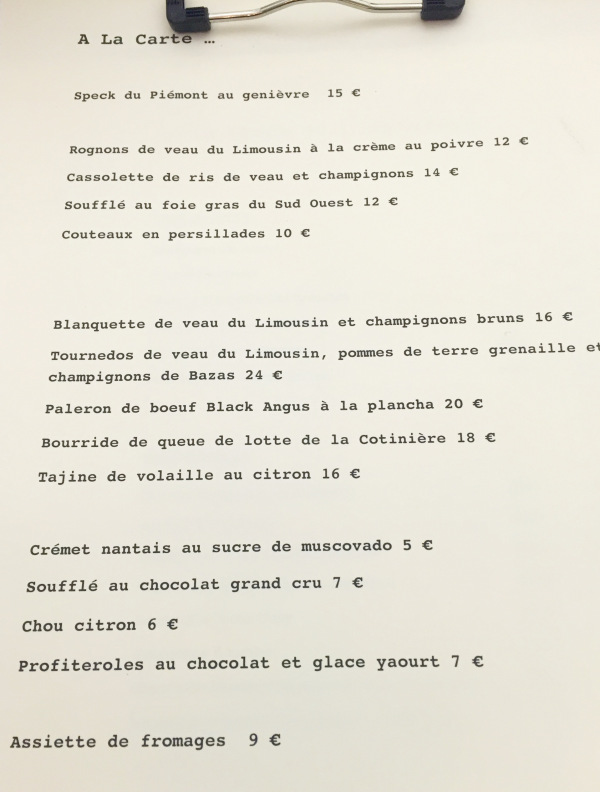 Our second bottle was a red Burgundy – a 2010 Claude Dugut. Like most red Burgundies, it includes 100 percent Pinot Noir.

“This guy is a true wizard,” Julien said.

This was easy on the nose, with a complex and intense dose of a black cherries in the mouth. After one sip, Julien’s prose heated up.

I had to edit that. It refers to a specific religion’s definition of their god. I’m not being politically correct here. Just cautious. After all, this is just a wine blog.

But the wine reminded me of a Beaujolais.

“Rounder,” said Julien. “Not as rustic as a Beaujolais.” 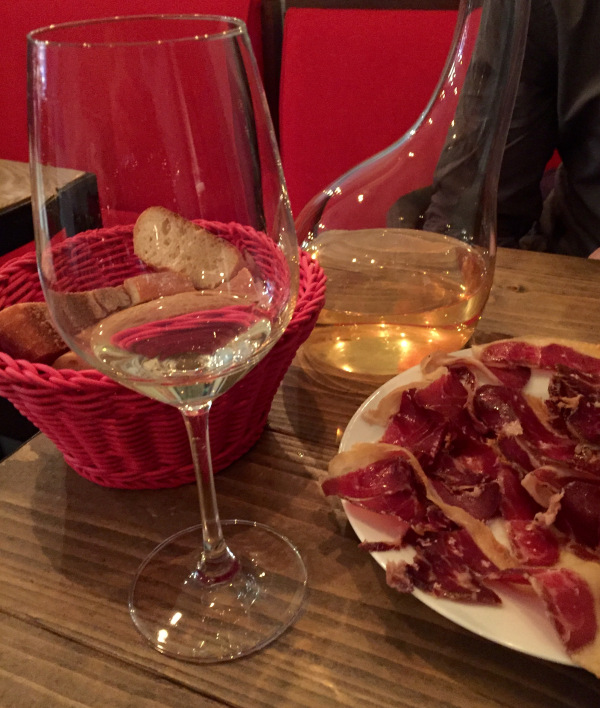 Our third bottle was another red Burgundy – a 2011 Nuits St. Georges. It had the peppery taste of a Chilean Carmenere wine and was a show stopping non-filtered black oasis of flavor. At only 12.5 percent alcohol, it shows that power can come without high alcohol content.

“It’s a Stradivarius,” said Julien. That was setting the bar high.

Still, I did shake my head in amazement. So amazing that I stood to wander the restaurant and insist other guests try it. Fortunately I calmed down and realized the alcohol was getting to me.

After two sips of this power – we talked about meeting up on Easter Island to share bottles of amazing Pinot Noir. We then realized it was probably good we weren’t conversing with anyone else.

Our next stop was Le Wine Bar (I do hope you don’t need a translation). 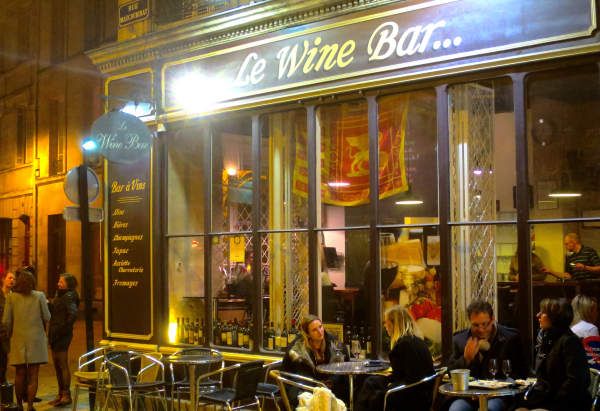 As soon as we sat, a plate of Parmigiano Reggiano cheese arrived. After that came a Chateau de Saint Cosme 2008 Gigondas AOC, from the southern Rhone Valley. South of Burgundy runs the Rhone Valley, and within the Rhone, Gigondas is an appellation that includes no white wines. The reds here are typical Rhone valley wines in that they include Grenache, Syrah, and Mourvedre grapes (what the Australians call a ‘GSM’ blend). Gigondas can also include 10 percent other Rhone varietals. Often these Gigondas wines are known for ‘power, not finesse.’ 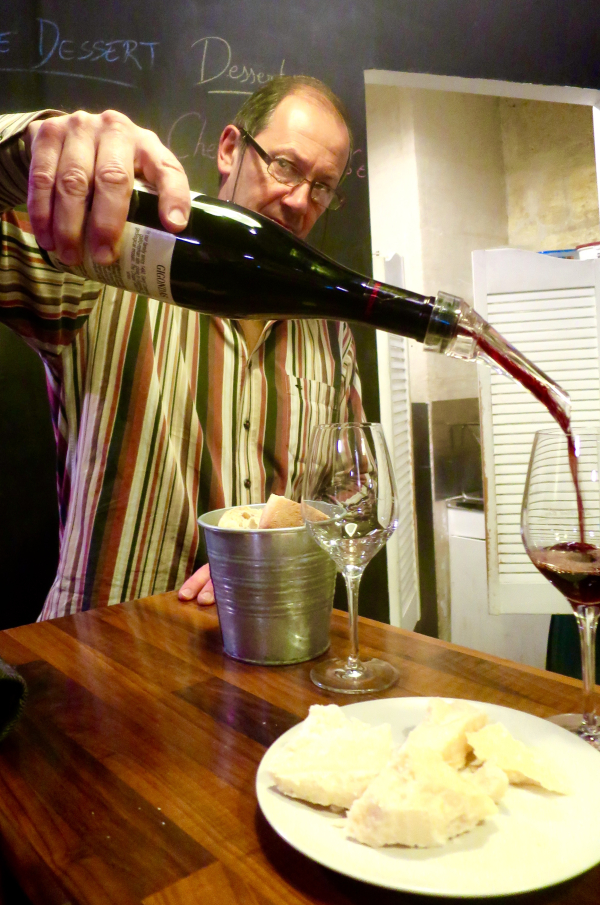 This was like a sexually advanced wine, a licorice all-spice wonder, an awesome combination of blackberries and cherries.

Julien’s taste lexicon now kicked into full gear, while I began praising the wine to a pair of English tourists.

“We’re back in the Middle Ages,” Julien said. “Though even so, this wine is still a bit young. This is definitely not a bottle to show to your mother-in-law.”

After that series of taste blasts in the beautiful ‘little Paris’ of Bordeaux city, it was time to walk home. Satisfied and happy.

If you do visit the wine country of Bordeaux, remember that some of the best wine tastes are affordably priced in some excellent, non-pretentious restaurants in this city, and most everywhere is accessible on foot or via tram.

We next cross the Atlantic to the USA – to northern California’s wine country.

A friend of my sister’s, Richard Sheppard, recently sent me a book he wrote titled Impressions of Wine Country.

This is a visual feast about the wine world of northern California, particularly in the valleys of Sonoma and Napa. Richard leads the reader across the Golden Gate bridge, describing its inauguration in 1937, and enters a modern world of wineries – including that of Francis Ford Coppola, Dutcher Crossing, and Toad Hollow. Many journeys take place by bicycle, and Richard’s insight into how to extend life is fabulous.

“I subscribe to the idea that good friends, good food, and good wine have a lot to do with longevity.”

The book travels through seasons – from ‘ZinFests’ in February, to a farmers’ market in May, to tasting Chateau Montelena Chardonnay in June, to cheese tasting in July. There’s a night harvest in August and wine blending in October. Each month includes a road trip, stories, tales of wine making and tasting, and beautiful watercolors that illustrate the colorful open spaces of California’s northern wine country.

It’s a good book and guide to this wine region.

Finally, after deciding to make changes, I’ve returned to France for a few weeks. Or months. I look forward to sharing wine insight and news here, and hope you keep tuning in. It looks as though I may contribute wine writing to Forbes – and will let you know.

Quirks And Qualities Of Life In France