Here are some notes about recent surprises from both France and England.

Burgundy – Expensive and Sometimes Deservedly So

The author of the Bordeaux Wine Blog is Alex Rychlewski, an American who has lived in Bordeaux city for decades. One of his recent posts describes an evening when we met, together with a friend from England, to taste two excellent wines in the city. The first was an excellent white – a Chablis, while the second was a Gevrey Chambertin from Burgundy. Here’s what I scribbled that evening. 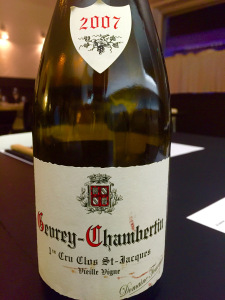 “This blew me away – an enchanted blackberry forest…with smoke and leather. No subtleties here. It’s like reading a medieval thriller that’s a page turner – dark and alluring. Chocolate, mint, and yes – really – even pencil lead.”

Earlier that evening I met up with television documentary producer Maxime Granata at a city wine bar known as Chez le Pépère in Bordeaux. He suggested a glass from the Faugères region of the Languedoc in southern France. This was silky and rich – a better wine from a region once considered – decades ago – to be a field of plonk. Overall, the quality in Languedoc improves, incrementally.

Maxime’s latest TV production is called The Wine Seekers. Click to check out the trailer – it looks zippy and fun and we’ll let you know when it comes out. 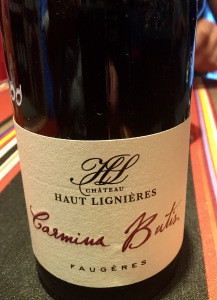 Three other wines are listed below – surprises from southern France and southern England. Two are made from unusual grape varieties. One comes from a region few even know about.

Jurançon – Where? And What Grapes?

That wine is a mystery, I told the friend who poured it. You’re sure it’s French?

Bien sure, he said. Of course.

First came the process of elimination: I sniffed and swirled and rolled it in my mouth like a happy child. It was not Sauvignon Blanc or Muscadet or Chenin Blanc. That ruled out Bordeaux and the Loire Valley. It could have been Chardonnay, but no it couldn’t be. The scent was strong with diesel, as well as apricots, orange rind, green apples, lamb chops, and – oh yeah – Play Doh. Seriously. It was buttery but chalky…like a cross between a well-oaked Burgundy and a mineral Chablis.

There was something out of the ball park with this wine.

The truth, my friend Julien told, is it came from southern France – between Bordeaux and the Pyrenees Mountains. 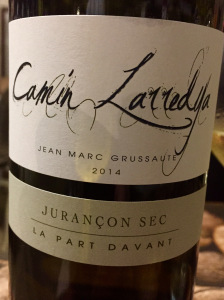 This was Camin Larredya – a white wine made from three grapes – Gros Manseng, Petit Manseng, and Petit Courbu. It looks like this region of Jurançon near the city of Pau – just a tad east of the surfing, bling-bling crowd from Biarritz – has been producing wine since around the 1300s (a colorful era when the 100 Years War pitted French and English soldiers in heinous longbow-versus-crossbow massacres while the Black Plague snuffed out a third of Europe’s population).

I’d never heard of the grapes, much less tasted them. Just when you think you’ve grabbed hold of understanding wine, someone uncorks a bottle not only of Manseng, but with gros and petit versions included.

Back to the tasting room.

This red wine was a raspberry explosion, which indicated Malbec included. And Merlot was detectable. Meaning the wine probably came from Bordeaux, or close. But it was smooth, agreeable, delightful.

This was a medium cuvée from the biodynamic producer Domaine Mouthes le Bihan located in the Côtes de Duras near the city of Agen, south and east of Bordeaux along the Garonne River. Agen is renowned for its large carmel-scented chewy prunes (best filled with Roquefort cheese, or stuffed into pork. Sometimes both).

At 15 Euros a bottle this is an unparalleled bargain. 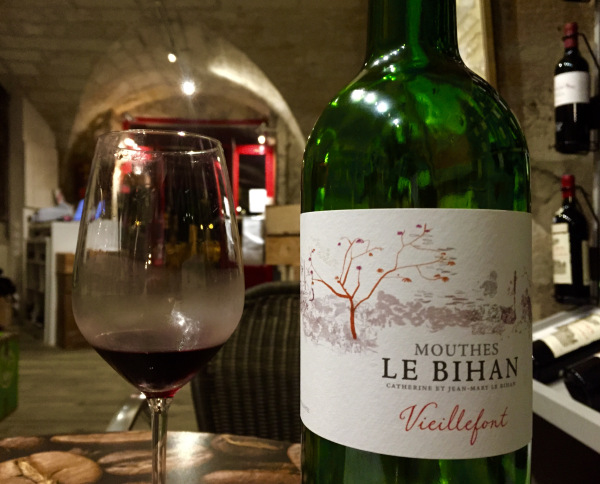 Dorking – Only 21 miles from London

This noble botrytis dessert wine comes from England (thanks David and Gaynor). Poured out of a 50 ml bottle it’s a sweet late harvest wine. Considering that that region is a fair distance from Sauternes, I was impressed by the smoothness and overall quality. This Denbies 2014 dessert wine is made exclusively from the Ortega grape (don’t worry if you’ve never heard of it; neither has most of the world). This winery uses grapes appropriate for the latitude and climate, including many familiar to Germans: Muller Thurgau, Reichensteiner, Seyval Blanc, and Bacchus, as well as Rondo and Regent. 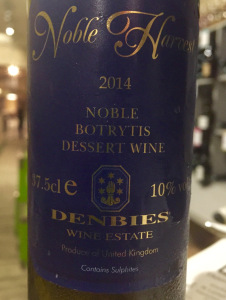 Years ago in the Cognac region, a wine maker told me how he learned his craft – paradoxically – in England. Charles Capbern-Gasqueton told me: “In England we didn’t have anything. There was a lab, but far from the place. You had to do everything on your own. For the sugar level, for fermentation. When you’re living in Bordeaux, in Cognac, and you need anyone to assist, it’s very easy to find people. You can’t in England. There’s no one there. So you have to do it with no help. You are responsible from the beginning to the end.”

For visionary vintners forging out in foggy territory with German varietals and a wildly variable climate – nice one. This wine is smooth and well made.