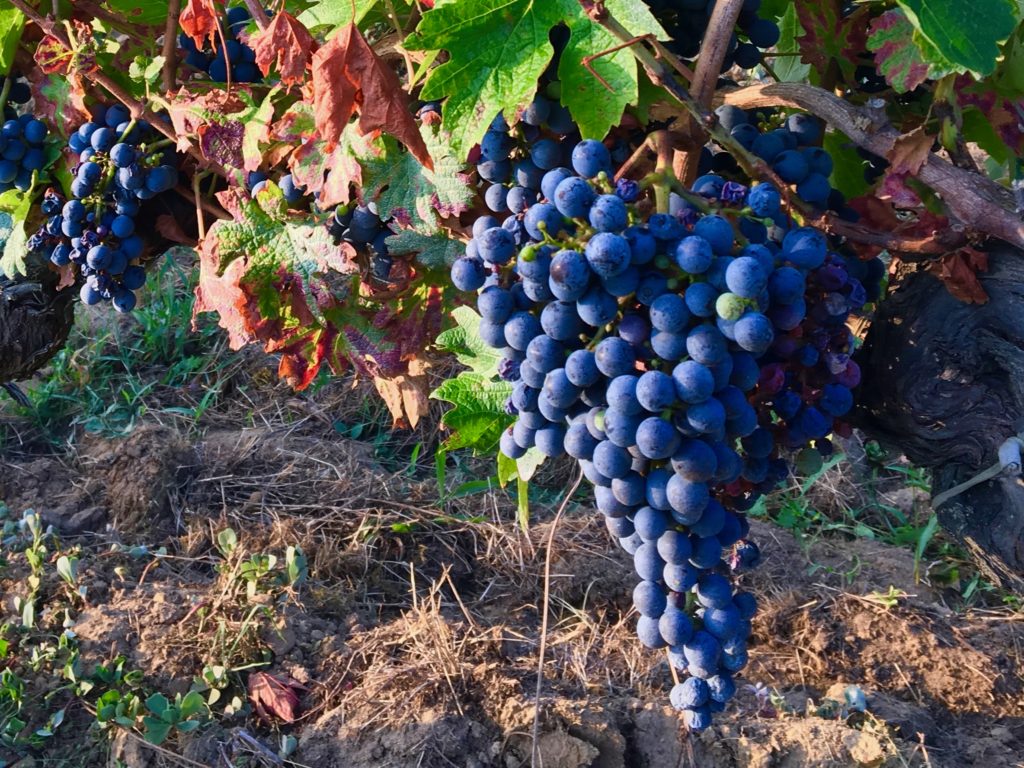 This is the new face of Vino Voices.

Same topic—but with a different format.

This fresh blog begins with a simple recollection. Although you may have seen some photos from before.

A Tale of Beaujolais

I was once invited to Beaujolais in France to taste wine. It was November.

A driver met me at the airport in Lyon. I had flown in from Lugano, Switzerland. This driver was well dressed. He had impeccable manners and drove a styling SUV. It didn’t take long to figure out that this was actually no ‘driver,’ but the owner of a renowned Beaujolais château co-hosting the event. He acted incognito, because he’s sort of a low-key guy.

As we drove, I looked out at low hills and the naked beauty of the Beaujolais countryside in autumn. The panorama stretched away on all sides and was soothing to view.

Within hours we arrived in the village of Lancié. I checked into the hotel. This was also where the tasting was scheduled to take place the next day. A young woman named Morgane met me at the reception. She worked with Château Moulin-À-Vent. She spoke fluent English. She suggested I eat dinner and sleep well because the tasting would begin at 9.00 a.m. the next morning. It would be, she articulated with a very specific adjective—‘intense.’

Oh, come now, I thought. A few sniffs and slurps and spits and note taking before lunch, and—Bob’s your Uncle. Pas de problème! Intense? Not likely.

I slept well. In the morning I enjoyed a healthy breakfast and met a half dozen other participants—mostly from France and Germany. There was one other American. Tall guy. Jeff. Lived in Texas (you know, that oenophile center of the Western Hemisphere). I learned  that Jeff apparently wrote a blog called The Drunken Cyclist.

Already, I liked the guy.

After breakfast we walked into a moderate sized room where three tables formed the shape of a U. Each was completely lined—very orderly—with bottles.

So, here is the thing.

At 9.00 am we would begin tasting wines—in whatever order we wanted—and taking notes on each.

By noon—12.00 exactly—we needed to have completed all tasting and evaluations, and have made notes on all wines.

I immediately considered that three hours includes 180 minutes, then used my phone calculator to divide 180 by 100 bottles to figure out that we had one minute and forty eight seconds to evaluate each bottle. That time included standing, moving from our chair to the bottle table, pouring a glass, matching the bottle name on the label against a printed list of producer and vintage names, returning to our seat, swirling, sniffing, tasting, spitting and scribbling notes.

Before I could wince, we were off to the races.

I transformed to a focused machine—reptilian in stealth—as fingers scribbled notes about color, taste, texture and quality before releasing the pen and darting, once again, to tables to pour another glass. It was like one of those whacky race shows on television. I imaged Benny Hill tunes playing in the background.

Jeff appeared more circumspect. Cautious. About an hour into this gig, he actually asked me a question. I told him I thought that the bit of brettanomyces funk he sniffed and tasted was actually regarded by various vintners as positive. He raised an eyebrow and chose to discuss that point with one of the winery owners present. Meanwhile, I tapped my watch and told him about the less than two minutes per bottle. He shrugged it off.

At noon, lunch was served. The tasting was over.

I’d managed to get through 85 wines, taking notes. I think Jeff was at 65 or 75. He was more methodical. But he told Morgane he’d work through lunch and grab a bite later. I reminded him that lunch was a religion in France and skipping it would be considered sinful. These motherly words did not faze Jeff. Good on him. He was on a Texas clock, and in no rush. (At which point I also began to wonder, what was the damn rush about anyway?). About an hour later he appeared to have wrapped up enough for the day, and enjoyed his tardy meal.

In the meantime, with a sandpapered tongue and blasted nasal passages I had forked down tasty lunch dishes while muttering words to a German wine magazine editor and, having not swallowed a sip as yet, bolted down a few glasses of wine with the food. And then a few more. After lunch we took a field trip to three wineries that were so far apart that the outing lasted hours. After that I stumbled upstairs to the hotel room to nap.

The combination of the morning intensity, lunch wines, afternoon visits—combined with chronic dehydration from my previous day road tripping to Swiss and Italian rural restaurants with a young firecracker of a Russian lady to sample local wines—finally caught up with me.

Feeling truly ill, I left a message for Morgane, then stayed in bed and skipped dinner. 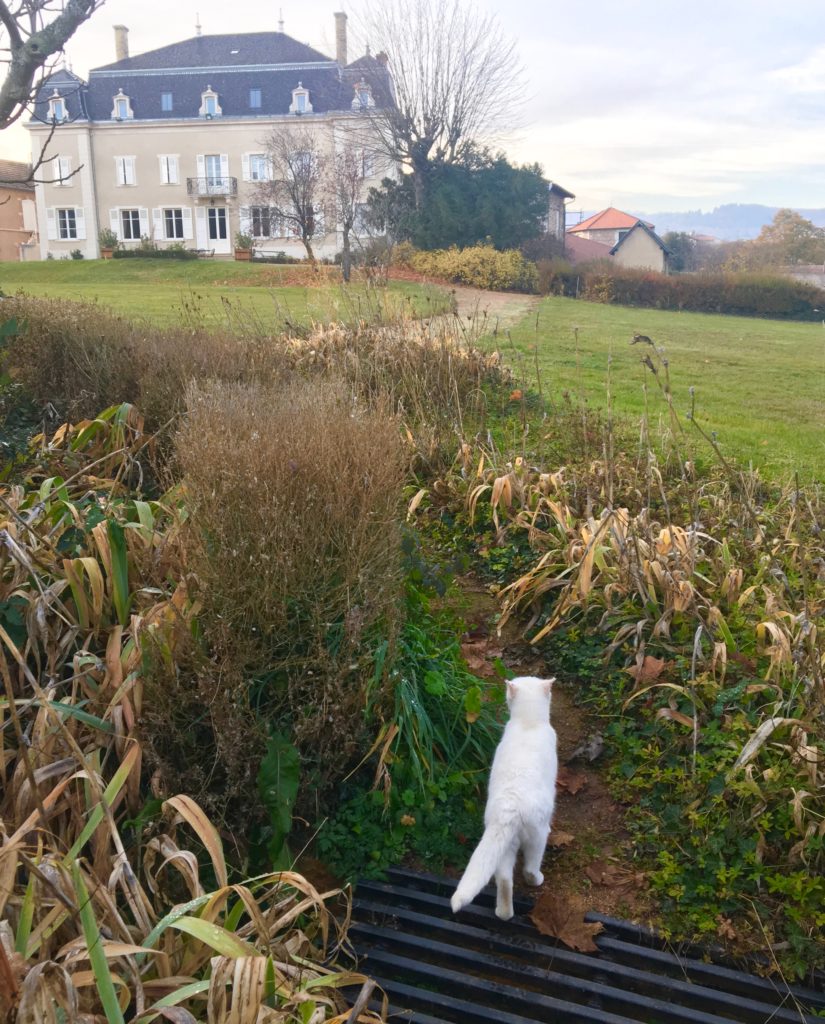 Month later, I met Jeff again at another tasting. In the hills of Northern Italy.

One afternoon, together with other wine tasters, we absconded with several bottles of leftover Conegliano Valdobbiadene Prosecco after a long, outdoor lunch and tasting at the Castle of Conegliano overlooking beautiful hills and valleys. We brought the bottles back to the hotel porch and spent a long and unrushed afternoon drinking them and catching up. Some of us were meeting again, and shared stories of travel and life. Which is part of the surprise and beauty of this mysterious world of wine.

I asked Jeff about that evening, the one I missed in Beaujolais. The one I felt bad about for not having attended. I expected to hear tales of tasting stellar vintages, endless toasts, spontaneous sing along sessions and heartland camaraderie.

Instead, he looked at me, shook his head, and winced. Apparently he too, had been blasted by travel and afternoon glasses of Beaujolais. Try though he might, he couldn’t recall any details about that dinner.

Which, somehow, made me feel better. The event was not electrically memorable.

But that 100 bottle Beaujolais morning? That memory will last forever. It was actually a fantastic trip.

Here’s what’s coming in the next months, whether on this site or via Forbes, or both:

Thanks again for tuning in …