Recent Forbes posts I’ve written are about wines from Sicily and Puglia, as well as from Prosecco country in northern Italy. There is also a review of a lively new book about aperitifs, by Kate Hawkings.

I recently drove across part of the United States to transport books to a cabin I own in a remote portion of the state of New Mexico.

The trip was both reinvigorating and mind clearing.

From Columbus, Ohio, I spent days driving across parts of the Midwestern and Southwestern U.S. states of Ohio, Indiana, Illinois, Kansas, Oklahoma, Texas and New Mexico, where I finally unloaded books. I then spent a night on that land, and later at the property of friends who own a new ranch where they produce ‘grass fed/grass finished’ beef (apparently the demand for this beef is too high for them to satisfy).

Much of the portion of this journey crossed parts of the geographical and cultural ‘heartland’ of the United States, which few people associate with wine.

Yet in the past they did, and may well do so again.

As mentioned in my book Vino Voices—Wine, Work, Life, before Prohibition (which basically outlawed alcohol in the U.S. between the years 1920 and 1933) the state of Missouri included the second largest winery in the U.S. It was named Stone Hill Wine Co., and was located in the town of Hermann. It was reopened in 1965 as Stone Hill Winery, and now thrives. Back in 1915, it sold wines with names such as White Pearl, Starkenburger, Ozark Queen and Sweet Scuppernong. The property included a nearby forest as well as a sawmill and the owners produced their own barrels. Stone Hill then sold 1.25 million gallons of wine a year, which won prizes in Paris, Vienna, New Orleans and Buffalo. Even earlier, in the mid 1800’s, a greater volume of wine was produced within the state of Missouri than in any other U.S. state.

In June of 1980, the first American Viticulture Area (AVA), [similar to a European wine appellation], was established. This defines required practices for producing wines within certain geographical regions (if they are to be accorded with AVA status). The first ever AVA status in the U.S. was conferred on the region of Augusta, Missouri. It was only eight months later that the second AVA was established—in Napa, California.

Today, Missouri’s wine industry is worth more than $1.5 billion annually.

Apparently July 21st has been designated as ‘Junk Food Day’ and a published guide pairs Norton with Nacho Cheese and Corn Chips, Traminette with Caramel Corn, Chardonel with Buttered Popcorn (note the prevalent role of corn in day-to-day life in much of the U.S.) and Chambourcin with Chocolate Sandwich Cookies, or Oreos. (French friends may not understand this celebration, no doubt.) A handy online map of Missouri wine trails breaks the state into 11 distinct regions, and identifies 65 wineries in a state that is about half the size of Montana, twice as large as Portugal, or roughly the same size as either Cambodia or Uruguay.

[I wrote about wines from Missouri before, in this article, and in this.]

While passing through Missouri, I stopped for a wine tasting (spitting only—no swallowing while on the road) at a winery named Les Bourgeois, off Interstate 70 Highway.

Below are tasting/value notes for wines tasted at Les Bourgeois. On a 100 point scale, wines here rank between 89 and the early 90’s.

These have been ‘value-evaluated’ (which relates overall quality to local price per bottle) as ‘superlative ♫♫♫,’ ‘excellent ♫♫,’ or ‘good ♫,’ based on my own proprietary Vino Value algorithm that matches subjective input (taste) to local bottle prices. Prices are local.

Nose and taste like a cross between Chardonnay and Viognier. Grapefruit on the tongue; an acidic mouthful.

Like a crisp Sauvignon Blanc on the nose. Brittle, crisp and tart in the mouth.

Ash and pears on the nose, meringue pie and chewy bananas in the mouth.

White flowers and a massive hit of lemon drops on the nose. Candy cane in the mouth.

Cherries and cherry cough drops on the nose. Black and white pepper in the mouth.

Leather, ash and smoke on the nose, though subtle. Acidic with mild lemons in the mouth.

Like a sweet Tempranillo. A stiff taste of wood in the mouth is offset by decent charcoal aromas and spice.

Below is an extract, about Missouri, from my book Vino Voices—Wine, Work, Life.

This piece includes the second half of a chapter about Stone Hill Winery. This ends a segment about co-owner Jon Held, and then includes an interview with their South African winemaker, Shaun Turnbull. [My writing is in italics; interview quotes are in non-italicized font.] 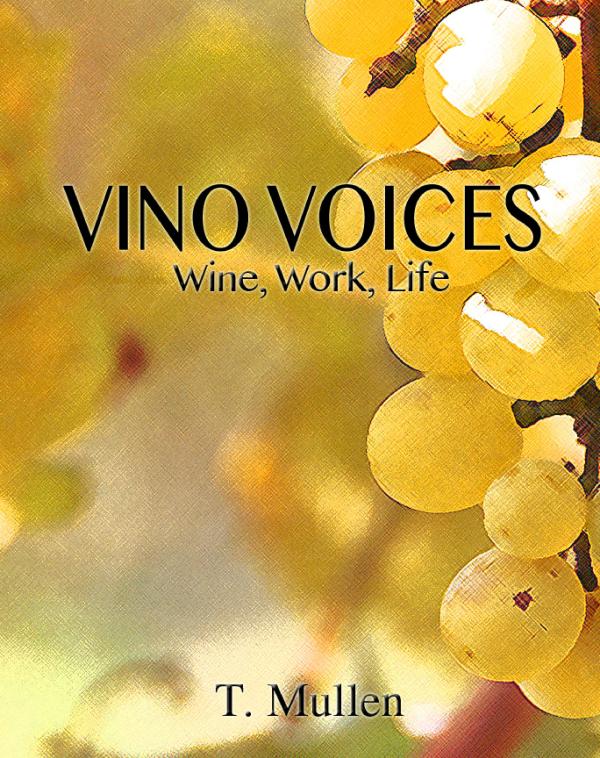 We return to the winery and enter a large tasting room. I look at photos on the wall. There is an award for Small Business 1982, presented to Jon’s parents by President Reagan in the Rose Garden.

Jon stands behind the counter and pours wine together with Shaun Turnbull. Shaun and his wife moved from South Africa five years earlier to work at Stone Hill. Shaun is young, tall, black-haired and wears a brown t-shirt. When Jon could find no local winemakers with the experience he desired, he recruited Shaun from South Africa.

I come from close to Stellenbosch in South Africa. Grew up there. College as well. I saw my future in the States. I’m pretty much a rock spider—an Afrikaaner who doesn’t speak very much English. I was brought up in Afrikaans culture, but also subtly with the westernization of South Africa. We seem to fit more in American culture than our own South African culture.

It’s pretty easy to make wine anywhere else in the world, but it’s not easy here. To make decent quality, you really have to know what you’re doing. It’s phenomenal. Pretty much the whole spectrum of wine styles is out there. Like Traminette and Vignoles grapes, which are very diverse. You can experiment and that’s really exciting. You don’t have to think inside the box. There’s always some new variety that pokes its head out that suits our climate. There’s a whole big pot of stuff you can work with.

The climate for grape growing, for winemaking, that’s challenging. Last year, October; cold, wet, we never saw the sun. It was like living in the northwest. Raining all the time. The leaves were falling off and turning yellow. That was quite a challenge. Sometimes you can plan a harvest and what you’re going to do. But here it’s like four seasons in one day. The weather can change like that. You’ve seriously got to make decisions on your feet according to what we get.

What drew me also was that it was a relatively unknown wine region. There’s no vinifera grape varieties in it. The size of the operation also blew me away for a Midwest winery. Just seeing all the equipment and the amount of effort that goes into producing. It’s not just a fad. I come from an area and a wine growing culture where it’s very, “Oh, wineries, cool, let’s try that.” But business wise, they were run like a hobby. But you come here and see this and you’ve never heard about it. But it’s a success, and there’s potential. It’s also a niche. It’s got its own identity. It’s kind of an angle. It’s unique. You don’t want to get ridiculously commercialized. You want your identity.

We try to keep our grapes from Missouri. I like that idea, keeping your own identity. Some producers around here, they’re buying straight from California to make a Cabernet or Pinot Noir. Why do that? It’s just another bandwagon.

We descend to visit the old vaulted cellars.

These are the old cellars, dug out by Germans. Think it took them eighteen years to dig. Imagine them by candlelight. They didn’t have electricity back then. This is the Apostle cellar. Used to have twelve big casks, and every cask had an apostle carved on it. Prohibition destroyed most of it. Legend goes that some of the barrels got saved and put on a train and shipped off to Germany, but nobody really knows. I like drinking red wine. I like making red wine. I like thinking about red wine. Believe me and my wife, if it’s ninety, one hundred degrees out there, we’ll drink red wine. We really enjoy red wines. I seriously like coming up with the best red wine in the bottle, making red wine from beginning to end. I’m not one of those winemakers who likes the limelight. I like spending time in the cellar, the creating part. I enjoy that.

Winemaking is a very patient process. You can think a lot about it while you make it, while you wait for it. You can ponder on it. You really think about what you’re doing and how it’s going to turn out and what you need to do. Wine is like an oil painting—you’ve got layers and layers to make it more complex. The more complex the wine, the better it’s going to be.

It can be frustrating. You’ve got to take a lot of care with this product because it’s a living, breathing entity. It’s got microbes in it—bacteria, yeast. You can spoil it easily. You could lose some complexity, some of the fruit aroma. You’ve seriously got to be very careful. One of Missouri’s challenges is to get educated people into the industry. The key wineries, they’ve got educated, experienced people. The reason? They’re business owners and do not treat it like a hobby.

I didn’t want something to tie me down in the office. I wanted to create something and knew I may as well use my God-given gifts; my palate and nose. I’m from the suburbs and had to compete with a lot of guys coming from the agricultural community. That’s what drove me. I really wanted to make it and prove to myself that I can actually do this. I never look back.

Thanks for tuning in…

In France – Dancing On Tables and Lalande de Pomerol Wine