1. Growing Contacts And A New Tab.

Thanks for your support, readers!

Also, the piece I wrote about 24 Zesty Hours In The Powerhouse Of Poitiers gained local media attention. This includes mention of honor in publication, and a recap of the article, though in French.

Other recent articles in Forbes are here, and include the story of how Argentina impacted a French winemaking couple, a wine book review, and Rothschilds and Four Seasons collaborating on opening an upgraded French ski resort. Tomorrow I’ll publish an article about wine wizard Henri Duboscq of Château Haut-Marbuzet in Saint Estephe.

This weblog also now includes a new tab that provides an overview (and history) of sizzlingly tasty Etalon Rouge Bordeaux wine. This very limited production Bordeaux wine (100% Cabernet Sauvignon and 100% Sauvignon Blanc) is produced from a small vineyard a group of us recently invested in.

Thanks to those of you in the U.S. who recently ordered bottles.

Here is a short travel piece—a recollection of a local afternoon spent here in southwest France.

Friends had mentioned a restaurant, thirty minutes away by car. On a recent afternoon, hungry and craving to explore, I drove to Au Four et Au Moulin (the Oven and the Mill) in the small commune of Reguignon.

The drive from Blaye passes by withered brown ferns, bent trees and strands of sagging barbed wire near a tiny village named Le Grand Village—where a sizable wooden barn appears about to collapse.

The approach to the restaurant is down a thin lane in a lost though lovely slice of countryside. I parked before a barn door and paced through an old mill leading to the restaurant. The interior is white and bright and the staff—wearing aprons and jeans—appear relaxed and welcoming. Mounted black and white photographs shot by owner Francois show rural scenes—neighbors shaking hands, cows moseying down a country road and a tractor plowing sod.

The third generation Huchet family constructed a flour mill here in 1908, adjacent to other buildings from the 1850’s. Decades ago, owner Francois Huchet and brother Jean-Marie did an impeccable job renovating the structure and transforming it into a restaurant.

This is an unobtrusive family dining venue. Politeness prevails: voices were hushed and siblings there were chatting instead of arguing.

Lunch is not rushed or complicated. I started with a glass of Tutiac white wine—sweet and simple, with acidic creaminess to balance a plate of salty Atlantic oysters and slices of baguette (the alternative appetizer—rabbit terrine—sounded a bit rich).

Tutiac Vignerons is a local wine cooperative that includes a few hundred winemakers. Collectively they pool juices and talents to craft wines from both the Blaye-Côtes de Bordeaux and Cötes de Bourg regions. This is an interesting organization in that it is the source of income for at least 100 families, and now highlights a focus on ‘sustainable’ practices, which include using only recyclable packaging and shipping materials. They also collect corks for recycling at their half-dozen outlets, and then donate the proceeds to a Bordeaux cancer research center. The cooperative has also donated a portion of their income to Médecins Sans Frontières (Doctors Without Borders) in the past.

I next ordered beef for the main course. Well cooked please, because I’m American—I joked. Chef Joëlle Brard laughed, because ‘well done’ is a culinary sin in France. It arrived covered in onion slices with golden slivers of fried potatoes.

The wine for this was a 2014 Château Siffle Merle prestige cuvee—100 percent Merlot.

This wine is a hefty and welcoming glass that tastes of graphite and cocoa, an oaked and balanced beauty. The dense juice—bulging with aromas—arrived like a signal that autumn is here. This is no Burgundian trapeze artist but a Bordeaux tightrope walker. Like restaurant diners around me, the taste came with a controlled liveliness.

Apparently this wine won a bronze medal in Mâcon. Does that matter? Mâcon is both the name of a city and its surrounding region located almost on the other side of France, in the southern portion of Burgundy wine country. This is where they grow Pinot Noir and Gamay grapes. If these quite discerning wine loving Burgundians slapped a medal on a Blaye wine from a distant corner of the country made from a grape they are unused to cultivating, that generally indicates they truly appreciated the quality.

This matched the raspberry crème brûlée desert with berries on cherries.

After lunch, Francois carried over a bottle of Champagne Cognac. He sat down and poured glasses and we spoke of history, harvest, travels and life. The sun was full, the autumn colors subtle and the pace of life unhurried. We had met before in Blaye, where he has exhibited photos taken from around the world.

‘Champagne Cognac?’ Yes, it’s Cognac (which is made in the west of France, in a region just north of Bordeaux) and is not associated with the Champagne wine region (which is located across the country in the northeast of France). Cognac is produced in six regions, of which one is named ‘Grande Champagne’ and another named ‘Petite Champagne.’

The word champagne comes from the Latin for ‘open country’ and so the term is not, cartographically speaking, unique in France. There is a Champagne commune (population 530) between the cities of Royan and La Rochelle near the western coast of France, another Champagné commune (population 3000+) in the Loire Valley just east of Le Mans, and there are towns named Champagne in Brittany, in the Rhone Valley and at other French locales. Heck, there’s a street named Champagne right up the road in the nearby commune of Saint-Aubin-de-Blaye. Although Champagne wine producers are quite proprietary about the use of that word, it’s a relatively common, and historic, location name throughout France.

The action of sharing a final drop after lunch was not unusual. Just as dessert is served after cheese and French words often terminate in soft vowels rather than blunt consonants, this culture enjoys smooth, rather than abrupt, partings.

The drive home—past vines shedding crimson leaves—made me consider what motoring may have been like in the rural U.S. in the 1950’s: country roads, small towns, farmlands, orchards and yawning open spaces. Rustic, simple, unrushed. Few traffic lights or chain stores, and full drafts of clean oxygen to suck down and enjoy.

A few back roads on the way home were not much wider than a single lane. The route passed a stately church spire in Saugnon, hay bales at Forgette and bleating sheep around Sabaron. Sunlight, like honey, opened wide above the village of Perrin and sweetened the day.

Aspects of life here can be a dream—sometimes providing abundance when least expected. This lunch was a reminder that sometimes we have to slow down and appreciate now.

3. Message From a Bottle.

Over a month ago I received this email:

I found your name during my try to find a special answer.

We live on the Swedish west coast. After storms we and our grandchildren search the shore for stranded goods. We find a lot of odd things from all over the world. Then we try to identify what it is and where it comes from. After that we make an exhibition for our neighbours.

Chocolate paper from the Philippines, milk case from New York, milk packages from Russia, shoes from China, wooden fruit boxes from Brazil and Argentine, radio transmitter from a weather balloon…

And, yesterday, we found a wine cork. We could identify it coming from Bourg. Due to the size we believe it’s from a magnum sparkling wine. BUT, we are not sure of the name of the wine or the vineyard.

It seems to be something like Sabinant de Bourg. (Maybe the S in Sabinant should be something else?)  Can you please help us to identify the wine if possible? (Maybe even with a picture of a bottle.) Or give me some hint of where to look for an answer? 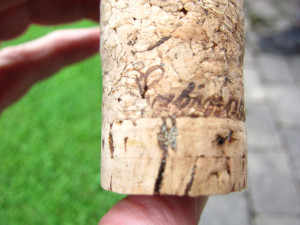 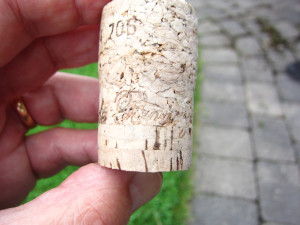 Uncertain, I crowdsourced the answer to this mystery by emailing local winemakers.

Soon, Rémy Eymas of Château Gros Moulin in Bourg responded. He suggested that the word was ‘Cremant’ (a term for sparkling wine) rather than ‘Sabinant.’

We also realized that cremant made in Bourg is called Cremant de Bordeaux. Therefore, it seems this cork probably said Cremant de Bourgogne (Burgundy), but the final letters were washed away.

When I informed Lars, he was delighted—and responded to tell about the origins of ‘trivial knowledge’ in Sweden.

“About knowledge of things like this I think of a Swedish expression – ‘Pompe knowledge.’ Pompe was one of the dogs owned by the Swedish king Karl XII 300 years ago. It may be interesting to know that, but absolutely unimportant in the whole. Fascinating knowledge anyhow. I looked forward to your blog. Thankful greetings.”

He sent a few photos of box sides they have collected on the shoreline: pears from Argentina, milk bottles from New York. 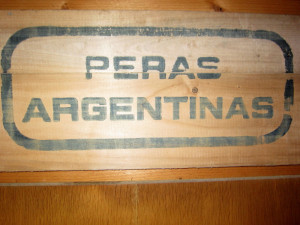 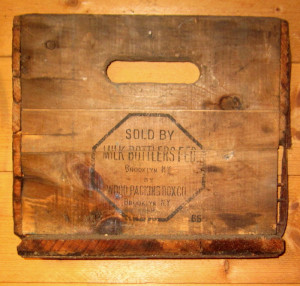 Lars—you have a most fascinating hobby to share with grandchildren.

This interaction reminded me of a paragraph I wrote years ago in my non-fiction book Rivers of Change – Trailing the Waterways of Lewis and Clark. It is based on an article I read while doing research. I had spent days in the basement of the public library in the city of Saint Louis reading past issues of the Saint Louis Post-Dispatch on microfiche. This came from a piece titled: ‘Ulster Girl Finds Bottle From Midwest’ [St Louis Post Dispatch, November 11, 1986, Section B, p.12.] 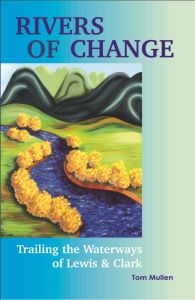 “The Missouri and Mississippi rivers meld together fifteen miles upstream of St. Louis before chugging south toward the Gulf of Mexico. The waters then join the Atlantic Ocean and disperse. A sixteen-year old Nebraskan teen-ager penned his name and address on a piece of paper, stuffed it into a Coca-Cola bottle and screwed the cap on. He tossed this into the Missouri River south of Nebraska City. A year later he ripped open a mysterious envelope from Northern Ireland and read a four page letter sent by a sixteen-year old lass. She told how she had found his bottle near her home in Downpatrick, Northern Ireland.

I thought it curious that littering — chucking a soda bottle into a river — denies that everything is connected, while throwing a corked bottle with a message inside embodies hope that all things are intertwined.”

Next time we’ll sample a range of excellent value Bordeaux wines and score them.

Also, Wine Enthusiast Magazine will publish my piece on Corsica for their February Travel issue.

Finally, stay tuned for two upcoming Forbes articles regarding Italy: the wine country of Abruzzo (photo below), as well as thoughts of a renowned Barolo winemaker.

Again, thanks for checking in.

Kick Off Any Event With Creamy Crémant Sparkling Wine