Years ago, friends and I drank liters of full-bodied beer on a hillside known as La Collina D’Oro (The Hill of Gold) in the Swiss province of Ticino above the city of Lugano.

Today, one of those drinking partners – Mick Coker – is reinventing himself and family business by producing award-winning beers and wines in Albuquerque, New Mexico. This includes mead, or honey wine.

The wines that are winning state awards include a 14.5 % alcohol Ruby Red mead, which won not only the 2013 Gold Medal but also the Best in Show Medal for two years. With a taste that includes blueberries, blackberries, strawberries and raspberries, Mick says the mead is “well balanced – a citrus punch.”

His 27-year old son Clint works with Mick to produce these winners.

“I just started making beers and ciders in 2011, and a year later in the New Mexico State Fair won a Gold Medal for cider, and the Best of Show Overall Medal for beers, ciders, and meads.

“We just kept working on recipes. I’m still hearing about the awards from people who’ve been working at making beer for ten years. It’s a thorn in their sides. Even though we’d only been brewing for one year, we were doing two batches a week. So just because you’re a ten-year brewer doesn’t mean you’re brewing that much. We put in the hours. We don’t look at it as years, we look at it as brewing time.”

One result of their rapid success is that, “A few people within the brewery scene shunned us. I told them that I drank in Switzerland when growing up, and learned to taste good beer.

“Five years from now, we want a big brewery. We’d like to have a place with a big dance hall with a saloon western environment – because, don’t people like to drink and dance?”

For dinner Clint cooked us sirloin steak with mushrooms and bacon, smothered in green chile and cheese.

Mick and Clint cultivate their own yeast. They showed me photographs of their yeast cells. They take pride in their ‘hands on’ approach – and provided a  quick tour showing valves, barrels, pressure gauges, spigots, hemosectometers, pipettetes, and hydrometers. This is quite a sophisticated operation, though Mick summarizes, “Some shit works, some shit don’t work.”

“I hated chemistry. I hated biology. If they told me I could make beer using chemistry, then I’d have been there at class fifteen minutes early, penciling notes.

Clint likes the challenge of making mead, because the technique is not widespread.

“The challenge is finding things I can compare my meads to.”

“It’s like a samurai sword,” Clint agreed. He talked about the history of mead-making in the Middle Ages and its prevalent role in the worlds of Vikings, Romans, monks, and nobility. 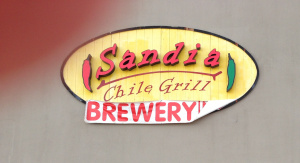 Earlier in the day, I had given Mick a hard copy of a book I wrote almost a decade ago, titled Rivers of Change – Trailing the Waterways of Lewis and Clark. Serendipitously, I recalled that the book included a passage about mead. I flipped pages to the chapter about Weston, Missouri, and read aloud:

“Inside, I sidled up to a wood counter beneath stained glass windows. A grinning lass with a hairdo in the shape of a bucket poured samples of honey wine, apple wine, and raspberry mead into three glasses. I downed each with ease. She told me how the owners of the forty-acre vineyard produced up to ten thousand gallons a year. While swirling more wine in a glass, I picked up a book marker titled A Little Bit of Romantic History. It told how Vikings and Norsemen first introduced honey wine (mead) to England. Savoring its crude bouquet, the English deemed the concoction a love potion, then forged a tradition that bride and groom sip the mead for a full moon cycle after marriage – thus the word honeymoon.“

“The ultimate goal,” Mick said, “is to make a living for the rest of our lives on good alcohol, and giving other people the opportunity to enjoy the finer things in life.”