Fifty kilometers northeast of the Italian city of Milan, where the plains of Lombardy shove against the Orobie Alps, both Romans and Venetians chose to establish a hills slope as a city.  Over centuries, three  plateaus now associated with the city of Bergamo were born.  The lower Citta Bassa is a typical Italian city with bell towers, walkways with arcades, piazzas and open markets.  The older, higher, walled city – Citta Alta – is similar, though the streets are narrower and more twisted, and the layout of buildings more compact.

Above and outside the walls of Citta Alta is the village of San Vigilio – approached on foot or via a funicolare tram car.  There, the  air is crisp, the views expansive, the greenery thick and the pace of life slow. 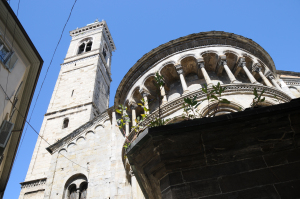 Typically Italian, where cities were once states that often warred with each other, the cuisine and wines of Bergamo evolved independently of other nearby locales.  The casoncelli pasta has its own shape and filling (sometimes beef or bacon or even fruit and biscuits), and three local DOC wines have the odd distinction of being either embarrassingly modern or intriguingly ancient.

Two of these local DOC wines are known as Valcolepio Bianco and Valcolepio Rosso. Why are they modern? Because the rosso is basically a Cabernet Sauvigon / Merlot blend, even though neither of those grapes are native to the Lombardy region.  The bianco is much the same (though with a hint of more variety) and includes Chardonnay, Pinot Bianco, and Pinot Grigio grapes.  Whoever pushed these wines for DOC certification was thinking about how to market popular wines in a modern world. They were given DOC status in 1976, which was renewed in 2002.

The two Valcolepios are tasty.  The bianco is fruity and fresh, and the rosso is dry, spicy, and goes well with beef.  It also turns notably smoother after ten minutes of being opened.

Let’s ignore these marketable and more modern wines and skip to the Moscato de Scanzo.

This is a truly local wine.

After eating local pacora goat cheese, bergamese ham, and local salami, this is the dessert wine to taste with friends.  This is fifteen percent of alcoholic sweetness – an odd but enjoyable taste of pepper and port – smooth and syrupy.

This wine is where the local action is. Although it was the last of all three of these wines to gain DOC status (in 2002, rather than 1976), it is the only one of all three to be granted the higher DOCG status (in 2009).  This is a fine tribute to a local grape.

This Moscato di Scanzo grape grows between three and six hundred meters elevation at the foothills of Orobie Alps east of Bergamo – in vineyards found only around the town of Scanzorosciate.  This grape was cultivated in the days of Romans (after they ejected the Gauls in 50 BC) when soldiers received land and vineyards as a reward for their loyalty.

The bottle I bought included wine from 80-year old grapes from what the shop owner said is the smallest DOC vineyard in Italy – a mere 8 hectares (20 acres).

Because this grape is rare and so few are grown, the price is high (49 Euros for a 50 ml bottle is not unusual).  During the Renaissance, nobles from Florence and Milan treasured this wine. 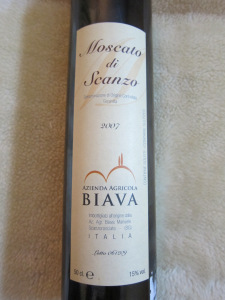 The grape is heavily aromatic and is processed in a unique way.  First, the grapes are laid to dry on a table for three weeks to concentrate their sugars and flavors, and then the grapes are carefully crushed to avoid releasing the bitter compounds in the skin and pips. Finally, the wine is aged for at least two years in steel or glass, as it tends to taste better without oak.

This is supposedly a vino di meditazione – a meditation wine.  I think it’s more appropriate to share it with good friends, food, and laughs.

Wine and Life—Consider This For 2018

Harvest Season And Moseying Around Médoc