A.A. Milne, the author of Winnie the Pooh, also wrote a poem about King John.

“King John was not a good man,

And no good friends had he.

He stayed in every afternoon…

But no one came to tea.”

King John was the fifth, and youngest son, of the Eleanor of Aquitaine – the legendary ruler of southwest France who during her long life married both the Kings of France and England, yet never lost her allegiance to the beautiful lands surrounding the city of Bordeaux that she loved – the Aquitaine.  Eleanor lived in the era of troubadors,  poets who sung of bliss and merits of marriage for love rather than convenience.  While based in the city of Bordeaux, Eleanor cemented the beginning of a stronger wine commerce with England. During her fiery life, she traveled to Jerusalem on a crusade, gave birth to Richard the Lion Heart, and spent 16 years imprisoned near Winchester, England, by her second husband because he feared she might set their sons against him.

Eleanor liked her youngest son, John Lackland, least.  He was not consistent, gracious, fair, or temperate.  History – as shown by Milne’s poem – does not remember him fondly.

John Lackland did – in the year 1199 – provide a charter to the town of Saint Emilion in France, guaranteeing its virtual autonomy during a chaotic period of history. Saint Emilion, in return, kept producing their magnificent wines which were exported to England.

Saint Emilion is a bit of a geographical oddball.  It’s not nested in the shadows of centers such as Paris, Poitiers, Rouen, or Bordeaux.  Instead, it’s a hummocked and hilly patch of semi-bald land set on a nondescript chunk of terrain two hours east of Bordeaux city.  It was named after a reclusive saint who revered nature more than scripture.  It also sits along pilgrims’ southern route toward the Spanish spiritual center of Compostela.

But great power is often hidden from view.

Saint Emilion happens to sit on complex array of soils above convoluted limestone and sandstone, all of which impact the flavor of grapes growing there.

In January, I visited the Couvent des Jacobins winery.  This is named after a Jacobite convent constructed in 1389 that forms part of this building. The proprietress, Madam Borde, welcomed us with gusto. Our guide was Greg, a wine merchant – originally from Australia – who runs the Bordeaux Classique wine store in town.

“There are two parcels of vineyard here, and another plot nearby,” Greg told us.  “Most wines include 66 percent Merlot, and the rest is Cabernets – mostly Cabernet Franc.  They have about 10.5 hectares [about 25 acres], producing 5000 cases a year, of which 33 percent of it ages in new oak barrels.” 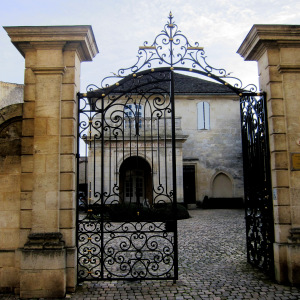 We bent double to enter a three and a half-foot high door that led to a stone staircase which descended to the cellar.  First, we looked at their wine library – dating back to 1947 (during the war, many wines were appropriated or transported elsewhere and hidden).

“The family has owned this chateau for over a hundred years,” he told us, then pointed into the immaculate cellar.

“The barrels are made from three different types of wood.  Top and bottoms made from pine, the body from oak, and rims from chestnut, because mice like to nibble on that soft wood.

“Madame Borde gives different names to each parcel of grapes grown and the wine fermented from them.  See?” he said, pointing at chalked names on barrels.  “Eva, Emma, Claudia.  All wines from different parcels are kept separated until blending, then aged in oak 12 to 14 months.

“There are 900 chateaux within five classifications in St. Emilion.  The wines are classified every ten years by blind tasting.  The Grand Cru Classe, there are 64 of them. Regarding the classification in St. Emilion, it’s about consistency.  Even during a difficult vintage you should still make good wine.”

After the recent September, 2012 classification, two new wines moved up to the top level – Premiers Grands Crus Classés A.  Before that, it was only Cheval Blanc (40 hectares) and Ausone (7.5 hectares).

“The plots are generally small.  For a lot of chateau in St. Emilion you can’t buy the wine there.  A lot of wineries are open, but they don’t sell to the public.

“The whole of the underneath of St. Emilion is hollow,” Greg explained.

For centuries, sandstone and limestone were quarried from beneath the town and sent by barges down the Dordogne River to construct buildings in the city of Bordeaux.  One result – wineries don’t have to build their own cellars because the earth below has generally been excavated.  Greg told the story of how Madame Borde, as a child, would put a picnic basket on her bicycle and spend hours bicycling through the interconnected cellars below St. Emilion.  Today, however, there are often locked gates between adjacent cellars.

As we walked through the labyrinth of cellars below, we heard the voices of others working and visiting neighboring cellars. Later, we visited Greg’s store within this beautiful little stone city. Stores here are packed with wine stores catering to all sizes of wallet.  These include excellent whites for nine Euros – evidence of bargains, even in one of Bordeaux’s most popular little cities.

Casablanca, Ulysses, and Sailing to Bordeaux

Wine, Life, and Insight along the Gironde