The Irish village of Lusk, from the Gaelic word Lusca – meaning cave,  is located 22 kilometers north of the city of Dublin.  The visual centerpiece of the village is a beautiful fusion of three buildings constructed during separate eras.  This includes a sixth century monastic  round tower from an age when Vikings invaded the island, a 15th and 16th century square tower attached to this, and a chapel joined to these towers in the 19th century. 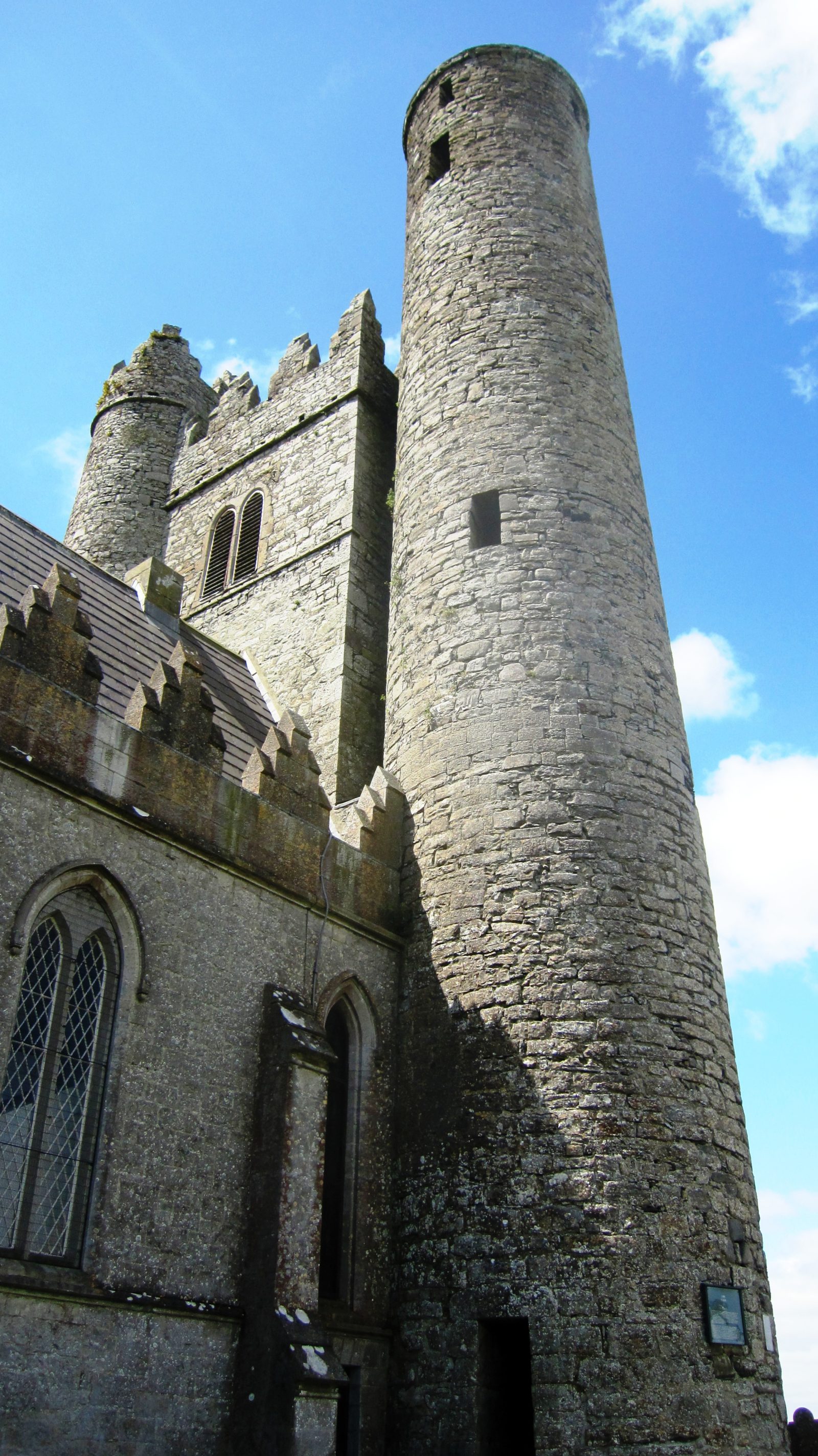 On a hot and sunny day down Bóthar Na Prasphingine, or Quickpenny Road,  David Llewellyn is working in his orchard and winery.  He wears brown leather sandals, blue socks, green shorts and a gray t-shirt.  He grows apples, cherries, pears, strawberries and grapes.  He also produces Lusca Irish Wine.

“It’s a challenge.  If I were out in the Napa Valley now, maybe I wouldn’t bother.  It would be too easy.  I had my first experience growing vines in Europe.  Germany.  I was working on a fruit farm.  The vine plant is a beautiful plant.  It’s lovely to grow and it’s attractive in so many ways and it’s a pleasure.  The whole process of growing fruit and then turning that into wine is fascinating.

“Here I grow the wine grapes Cabernet Sauvignon, Merlot, Sauvignon Blanc and a scattering of a few others as well.  Little known ones that people wouldn’t have heard of, hardy varieties that originated in Germany, like Rondo and Phoenix, Regent, Solaris.  They’ve been bred for tolerating cool summers, but they’ve also had resistance to disease bred into them.

“It’s only a small plot, quarter of an acre, where we make the wine from.  The Cabernet Sauvignon and Merlot are seasonally covered for summer months because they’re not able to ripen in our climate fully outdoors.  But the Rondo and Regent and one or two of the hybrids, they’re in the open.

“There’s no arguing Cabernet Sauvignon cannot be grown in Ireland without some form of assistance and protection.  We cover them over in the spring, early summer and take off the covers after harvest.  I don’t need to spray the vines.  Okay, you might say you’re covering them.  Some people might say that’s cheating.  But if you drench the vines in chemicals for the whole summer long, is that cheating?  I don’t need to spray any pesticides on the vines.  I don’t have any high-tech equipment.  I don’t even have a filter.  So it just settles naturally, clears naturally.  It’s all a very simple, simple wine.

“A variety might make a nice wine but be a bitch to grow.  The Sauvignon Blanc turns out lovely wine and may be the most asked for.  And I hate the vine itself because it’s so difficult to train and to keep right.  Whereas Cabernet Sauvignon I find a joy to grow.  It’s such a beautiful looking vine and it behaves itself and flowers and crops beautifully and ripens nicely.  It’s a lovely vine to grow.”

David leads the way behind his house to a flagstone deck and a brown wooden table with chairs.  Cows moo and birds chirp nearby.  We look down at his orchard and vine rows.  He pops the cork on two 375 ml bottles of red wine.  He slices up cheddar cheese and a chicken soon hops on the table to peck at a slice.

“That’s the Cabernet/Merlot.  Forty – forty with twenty percent a mixture of a few other vines I have – bit of Pinot Noir, Dunkelfelder, Dornfelder, scattering of a few others.  I’d happily drink all of that if I couldn’t sell it.”

David then points to the other bottle.

“This is from the Rondo grapes, grown entirely outdoors.  I only made a tiny quantity.  People from abroad have inquired about it and I’ve sent it out.  People ring me up after they’re read or heard something and want to go out and buy a few bottles.  It’s in one or two restaurants as well.  The Winding Stair on the quay.  Very good restaurant.”

His wine label shows a drawing of the Lusca round tower and chapel.

“I got a fella I know to do a sketch of the church from different photographs from different angles.  We decided on that and took it to the printers.  I’ve only one label you see.  One generic label front and back and I write the variety, the year, whatever the alcohol content is.  I wouldn’t have the neck to sell it if I thought myself that it was undrinkable stuff.  I was a bit trepidatious when I started to sell it.  People have bought it, and they’ve paid their hard earned money, and as I said, lot of people have come back, drop by the stall and say the wine I bought there two months ago was lovely, lovely.  We really enjoyed it.  That’s a real reassurance.  It’s kind of a vindication.  I feel a little more relaxed with it at this stage.”