Three hours east of Bordeaux and an hour and a half north of Toulouse, the sine-shaped River Lot snakes through the hills of Cahors wine country.

Red wine from the Cahors appellation must include 70 percent Malbec (known locally as Côt) and 30 percent Tannat or Merlot, or a blend of both. No Cabernet Sauvignon or Cabernet Franc are allowed.

That’s a hefty dose of deep black tannins. Which means – producing tamed and balanced wines is a challenge here.

In the year 1137, fifteen-year old Eleanor of Aquitaine (which was the wealthiest province of what is now known as France), married the King of France. At this time the Medoc region of Bordeaux (which now produces the famed ‘First Growth’ wines) was an uncultivated swamp, devoid of vines. The wine for Eleanor’s wedding in Bordeaux City came, instead, from further east – the region known as Cahors. This wine had a reputation for being dark and hardy and having a long life. When rot killed great swathes of Malbec vines in 1956, the region of Cahors did not rip out the grape vines as did many other regions in France (and Bordeaux) but continued to plant them during succeeding years.

I recently visited Cahors with Stella Kim, a South Korean wine sommelier now based in Singapore. Taking her away from the more branded wines of Medoc and Saint Emilion seemed to be a good way to get her to appreciate a lesser known, yet attractive, wine region that produces good quality and good value French wines.

We visited three wine châteaux in a day, and enjoyed more bottles during our meals. We ate lunch at Hotel Bellevue overlooking the Lot River in the town of Puy l’Evêque. For dinner we drove a half hour to Le Gindreau restaurant (one Michelin star) in the location of Saint Médard – hidden in the countryside. The best bottles were smooth and balanced, though hardy. Those of lesser quality were tannic yet bland.

Note that one wine we tasted (and which I bought several bottles of) is named Probus – after the Roman emperor who decreed that local wine could be grown again after an earlier prohibition was imposed by the empire leadership. [My other posts about Romans and French wine include Long Road through Languedoc, and Wine Bottles and Battles].

Fortunately, we found a few beauties in the region. After some long tasting sessions, followed by bottles of Belgian ale, we even managed to snooze a few hours before returning to Bordeaux.

And the Cahors region? Beautiful.

My scoring for wines we tasted are below, using the Vino Value™ algorithm. * 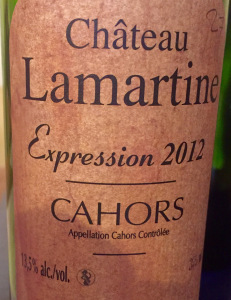 Biodynamic Bordeaux in the Médoc

Kick Off Any Event With Creamy Crémant Sparkling Wine